The research put numeric handles on a previously ungraspable crisis, and they’ve been cited ever since – vital tools in the long-push to bring global surgery onto the global health agenda.

Two other things to know about the Stanford surgeon and Lifebox trustee:

2. and he’s currently to be found in Battambang, Cambodia, working alongside local colleagues at the World Mate Emergency Hospital, to introduce it! 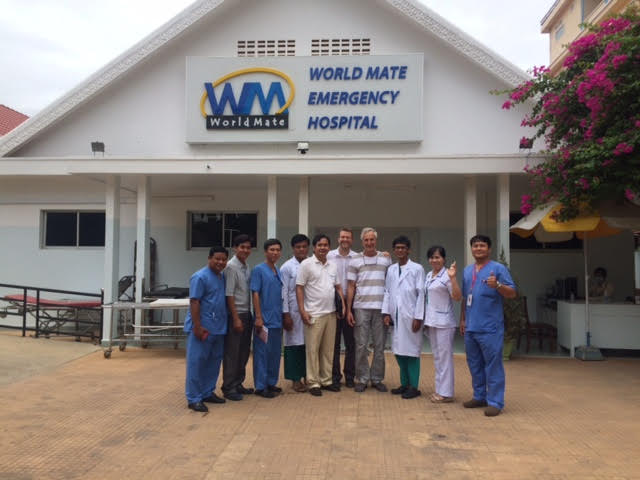 We’ll be checking in with Tom over the next few weeks, as he reports back from the hospital about Checklist implementation – from Geneva eye level to the front line.

We used the new Khmer checklist today. The nursing director of surgery met with the anaesthetists and scrub nurses to review it. She also reviewed the plan for auditing use and asked their opinion on its layout, aesthetic, and a colour scheme for printing. Lastly she asked about language issues, and what language the poster should be printed in – both English and Khmer.

When the team first started this morning, they used the English version. But after a quick redirection, they used the Khmer version and it definitely seemed to promote conversation.

I brought the electronic version over to the office staff, and in about 3 minutes they had a beautifully laid out, designed, and colored checklist. It would have taken me about an hour of work to do this!

I reviewed some of their data collection plans and the strategy for the audit. There are a number of ways to support it, primarily through an electronic audit form using a tablet. We’ll be working on this next, as they sort through the details of data collection and what they can realistically collect retrospectively and prospectively.

This afternoon the hospital hosted a party. Each quarter they recognize a medical and non-medical employee and give them a 50lb bag of rice in recognition of their great work. They also announced our Checklist project. Most of the hospital staff don’t know what we’re doing, since it’s very focused on the OR – so I explained the work, and then the head surgeon said a few words.

He spoke to the crowd in Khmer about how excited the entire OR crew was to take this project on. I presented a few gifts – Stanford T-shirts and hats – and they presented me with a traditional Khmer scarf and a picture of the staff and the hospital. I was very touched, and it was a wonderful end to this implementation work.

I head to Phnom Penh tomorrow, and we’ve got a series of meetings.  I’m pitching the idea of a country-wide program – we shall see what the response is!

After morning report, where patients admitted over the last 24 hours are reviewed, and where we run through the operating list, the head surgeon asked everyone how the checklist was going.

There were only surgeons in the room, but they all thought it was useful and helpful. One of the very thoughtful and involved junior surgeons recommended one more slight change, which the others agreed this would be useful – so I quickly made the edits and printed up new lists to use!

It was overall smooth, and they’re doing the checklist unprompted. The circulating nurses in particular are keeping the other team members honest, and have been a driving force. The surgeons are absolutely on board, as are the anaesthetists, with the head surgeon incredibly supportive. I have been trying to fade into the background…

The surgeons want the checklist translated into Khmer as well as English, and also wanted posters on the wall – we’ll have it ready for a test run on Monday. They’ve reached a point where there a clear diminishing returns with small changes to the checklist itself. They are comfortable with it, and want it prominently displayed to remind everyone to do it.

I have also given the head nurses a set of template data collection forms that they can use for both auditing the checklist and assessing wound infection rates. It will be a pretty big lift to collect these data, but they’ve been incredibly supportive thus far, so we will see how things shape up over the next several months…

We tried out a new set of modifications today – subtle tweaks and changes that made a few points more explicit. Whether due to this or growing familiarity with the Checklist and the routine of incorporating it into the workflow, things seemed to go much more smoothly.

There were still some difficulties, but these were mostly due to issues that arose because of the checklist – things like the lack of site marking prior to arrival in the OR. Most site marking in this hospital is redundant, as patients have large wounds, deformities, or bandages that clearly mark the site. Some of the closed fractures, however, are subtler.

I have noticed that they catch small issues and inconsistencies nearly every time – certainly during the bigger, more complex cases, so I continue to be convinced that there could be dramatic improvements over time.

I also spoke with the nurses about how to measure things. We ultimately opted for spot audits through direct observation to assess Checklist compliance. They are in the process of reformatting their entire infection collection and documentation process, so we can use this in a time series as well, which they are keen to do.

I spent some time with the charge nurses, and they want to push for a poster-sized Checklist to put on the wall. They want the OR staff to be on board though, so will present a couple of options to the scrub nurses, anesthetists, and surgeons. Clinical communication is supposed to be done in English, but language has been an occasional struggle with some of the technical words and processes.  It would be good to have the poster translated to Khmer.

A few more tweaks today to the Checklist, another road test tomorrow, and I think we are really close to a final version.  It’s been interesting to re-experience Checklist implementation, years after our original pilot study.  Lots of challenges, but I think we are now sophisticated with respect to how to get it done. Also we’re in this for the long haul – we’re much happier to work slowly, build relationships, than move fast and have it burn out soon after.

One heartwarming thing that is happening is that after everyone completes each phase of the checklist, the OR team applauds. I’m not sure how long this will last, but it is a very nice touch!

We tried out the revised checklist today in the OR. It was interesting, even though doing it out loud and as a group disrupted their routine. This was particularly true of the Sign In, with a more comprehensive set of checks that involved all team members. There were a lot of questions, like who should be holding it and who should ask who what. Finally they settled on a routine to try, and the next time they did the Sign In it went much more smoothly. We were lucky that it was a fairly slow day in the OR, so there was lots of time to practice.

One thing that will be nearly impossible to avoid is the desire to “check the box” – it would be countercultural to have a tick box that does not get checked off.

We identified the lack of administering antibiotics twice today, out of three cases (although both wounds were severely contaminated so the effect would not be pronounced). We also identified that one patient had a potential bleeding diathesis during the concerns section of the Time Out and spent some time trying to figure out what happens when these issues are identified during the checklist. There is no doubt in my mind that if we really set out to measure outcomes and strict process measures we would show powerful results.

I met with the operating room staff today. We had a working meeting over lunch that lasted about two hours. The room was set up like I was going to give a presentation, so I hauled the table into the center of the room and set the chairs around it. Even still, most everyone stayed in the back of the room, leaving me alone at the far end of the table…

I started by passing out a few paper checklists and showing them the original video we made in the BWH simulation center. After each section of the checklist, the hospital manager asked them what they noticed about the interactions. They all volunteered that the checklist was completed out loud, but they were confused about who “owned” it, who was responsible for making sure it was completed.

One of the head surgeons admitted that he hadn’t really understood before this that the checklist should be done out loud as a communication tool.

I introduced the idea that World Mate should make its own checklist, one that functions for them and their routine.

They wanted an example. So I suggested removing the confirmation of patient and surgical site from the Time Out and making the Sign In patient confirmation stronger and more detailed. The surgeons then remarked that they also thought the positioning and site marking confirmation should be moved there as well.

The next thing I knew the entire group of surgeons, nurse anaesthetists, and scrub nurses were pulling chairs around the table and looking at their checklists, wondering how to improve them! We rearranged, revised, debated, and sorted through the different checks for the next hour or so, and at the end had a brand new, World Mate certified, draft checklist.

This is only a draft, and now that they’ve made some the changes, we have to try it out to see if it worked. They are all keen to try it tomorrow.

I spent this afternoon putting it into a Checklist format, and I’ll print out a number of copies for trial tomorrow. We will see what happens…