Not every comic is meant to be funny. While the Scottish city of Dundee’s classic troublemaker Dennis the Menace always lunged for the elbow, one of its newer residents has gone for the incision. 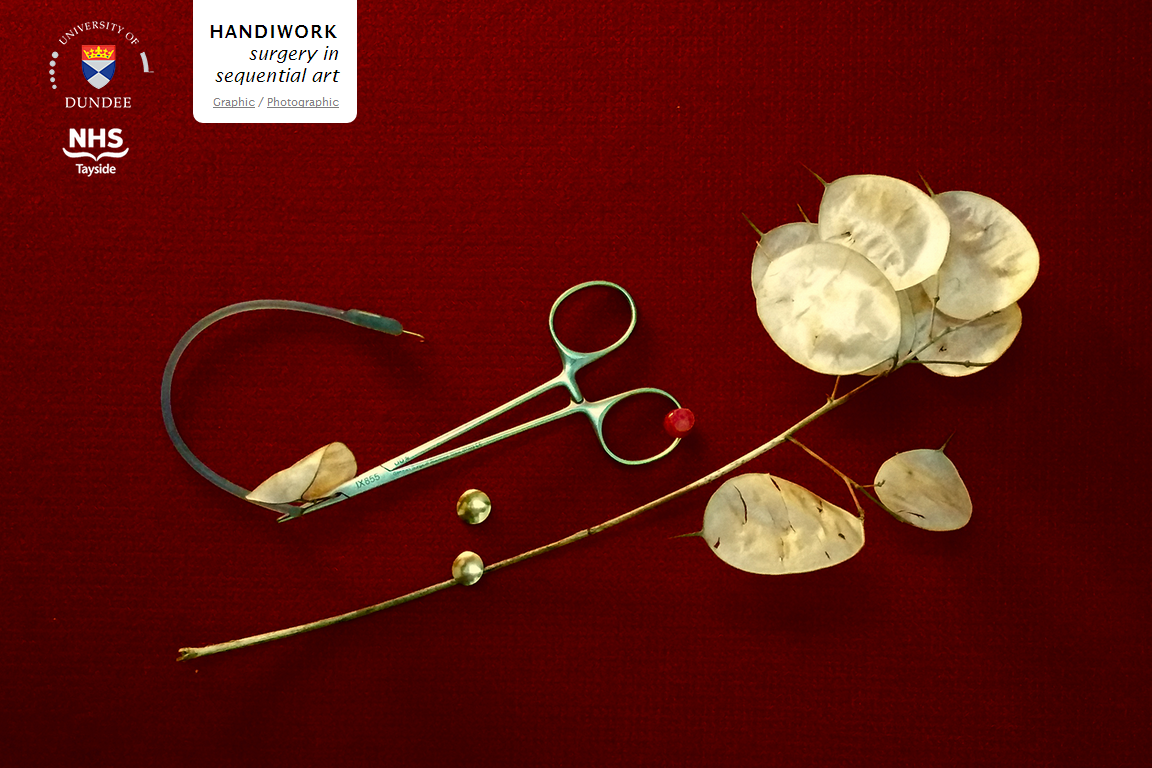 Handiwork: surgery in sequential art, by Emmanouil Kapazoglou, adapts the comic strip format to tell a serious story that is both strange and familiar.

It follows a typical operation on a typical day for a surgical team at the Tayside NHS Trust. Through the prism of the World Health Organization (WHO) Surgical Safety Checklist, we’re taken on a step-by-step journey of the pulse points and timeframes of a surgical procedure. 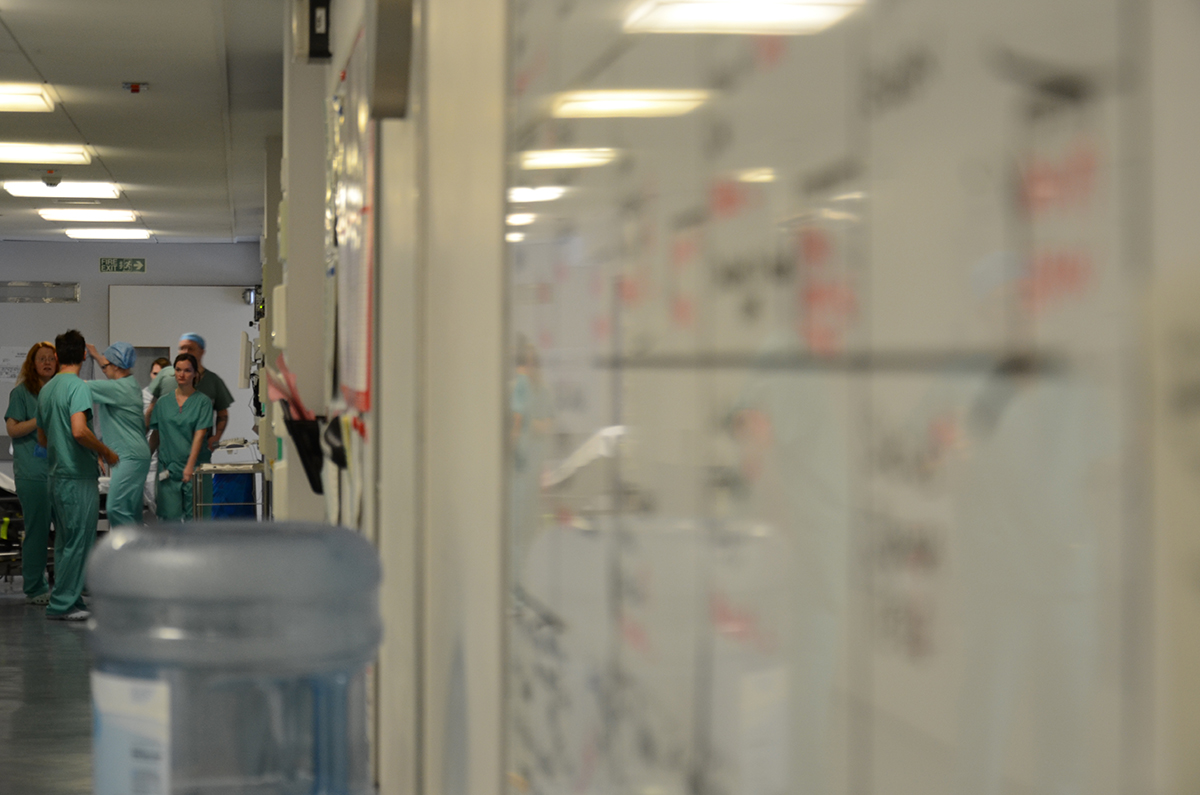 Scroll slowly. The panels, as with any comic strip or the boxes on the Checklist itself, can only succeed in linear, deliberate steps.

First through the photographs and then through illustrations of those real life images, past the swinging doors and under the hot lights. 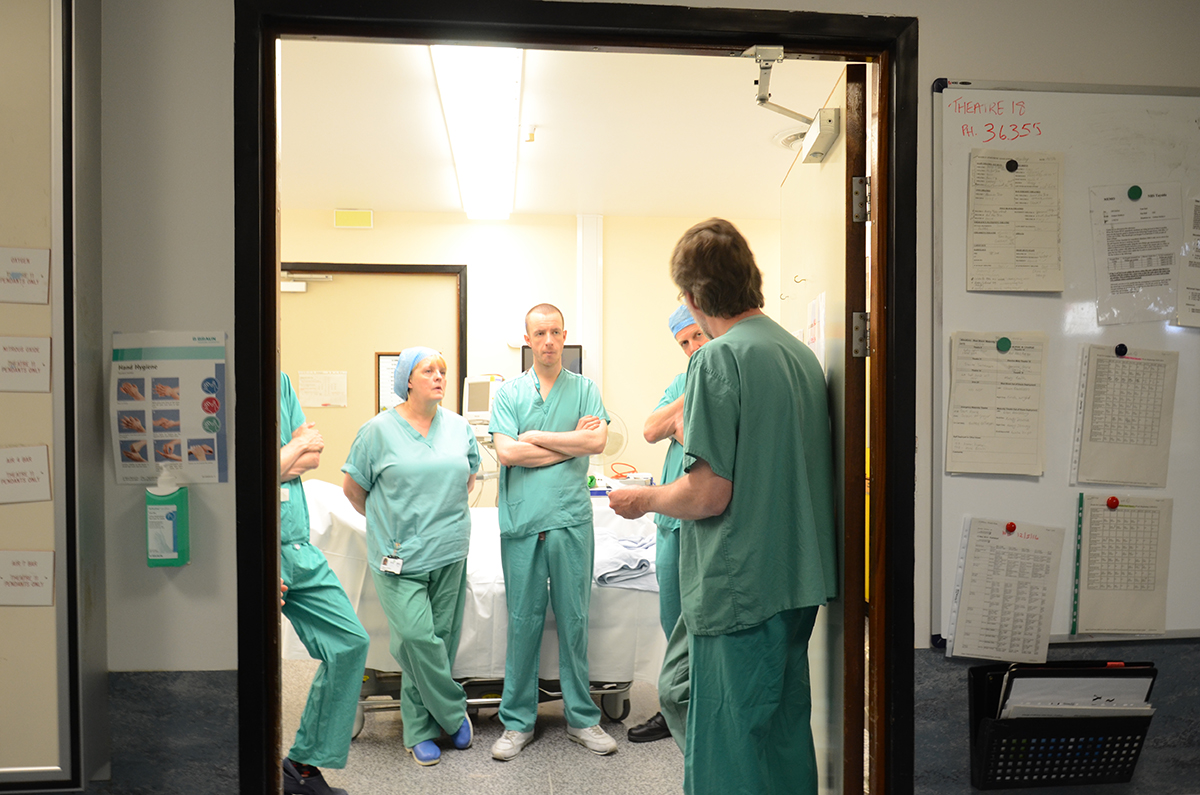 Watch as the seeming chaos of masked faces and machines reveals its tightly-rehearsed order – and the team’s intense focus on the safety of the one person not expected to play a role, the reason they’re all here: the patient, lying insensate on a table in the middle of the room. 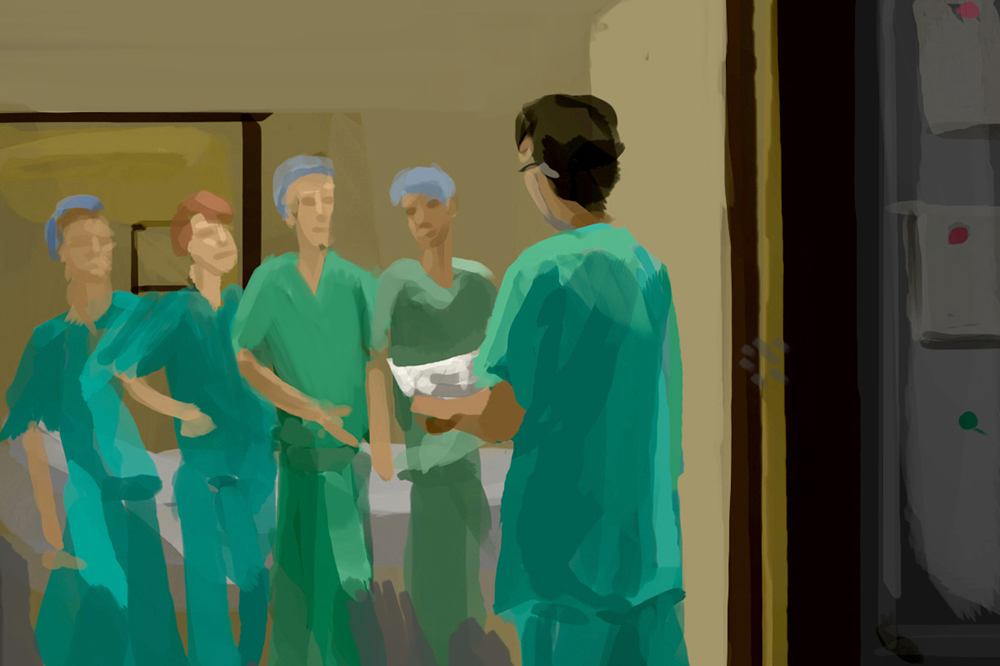 You’re completing your masters in Medical Art at the Duncan of Jordanstone College of Art and Design, but this still seems like an unusual subject! What led you to the comic strip and the operating room? 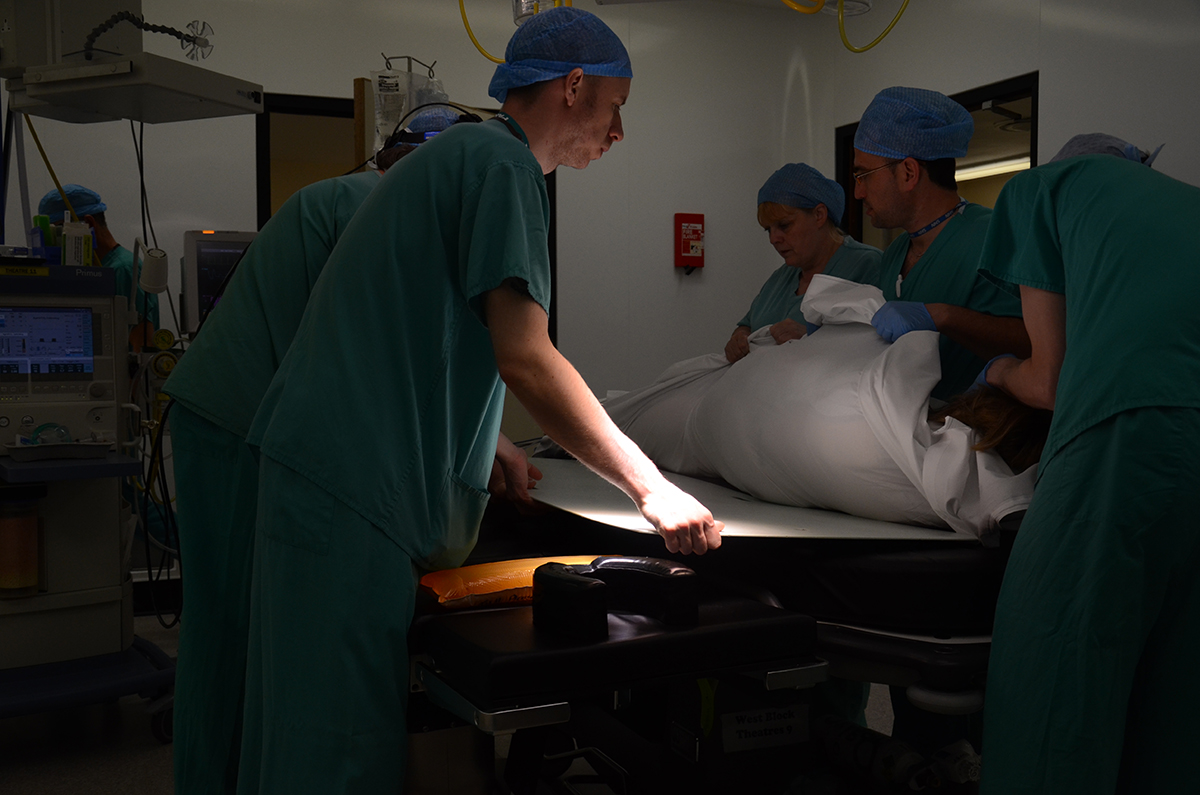 Comics are so important in medical education. They have a visual impact and a strong message, but they’re also a helpful generalisation – they can expand the experience of an individual into human experience regardless of gender, age, nationality etc.

They can also speak to the non-medical community, and I was interested to see how they could translate what goes on in an operating room. I wanted to capture the teamwork necessary for a successful surgery. 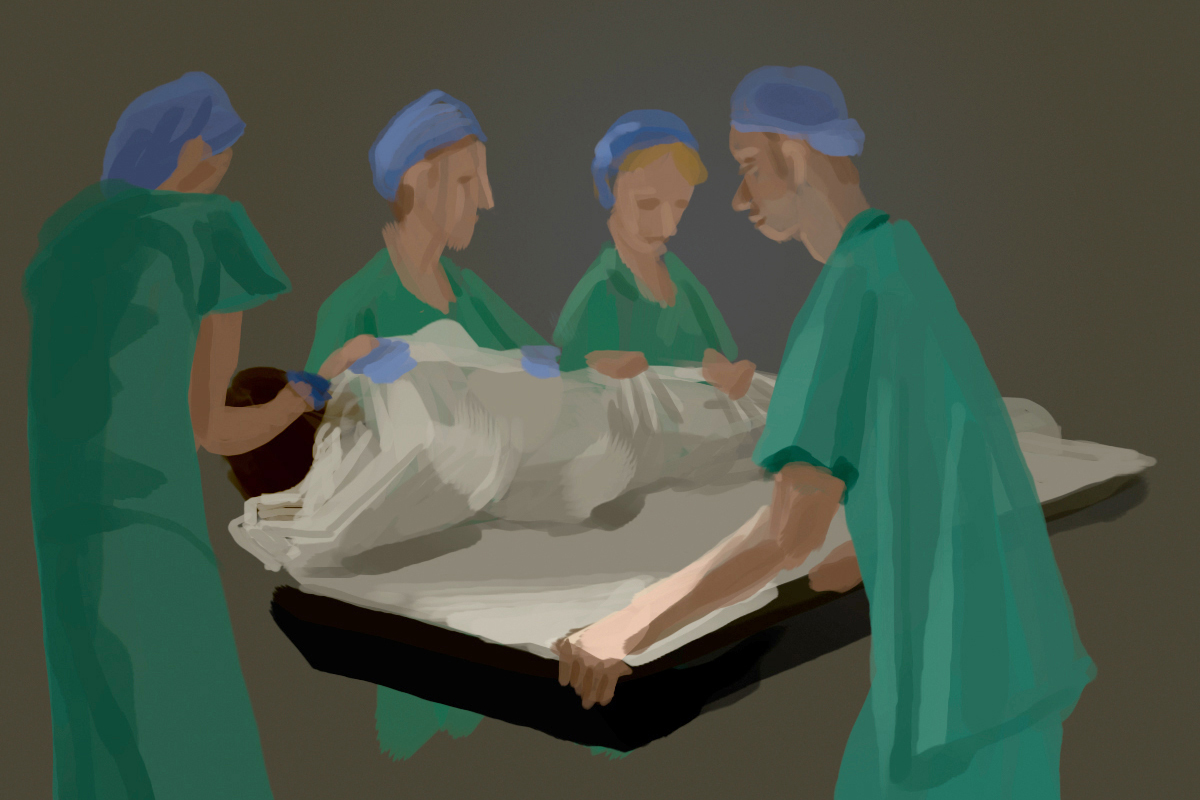 What surprised you about the operating room?

How calm it was. Medical dramas on TV make it seem stressful – what a misrepresentation. The OR was such a calm place.

Why did you choose the Checklist?

I wanted to show something constant, and the Checklist is the backbone of how surgery happens nowadays.  I was very surprised to find out how recently it was introduced – and how difficult it is to change certain patterns of behaviour when people have learned to be kings in their theatres.

Did you see it have an impact?

Seemingly small things, like an allergy not noted down – that could have been catastrophic, but the Checklist caught it. The simple communication it allows between the theatre staff, between the anaesthetist and the ward nurse – there’s a human life on the line, it’s essential. 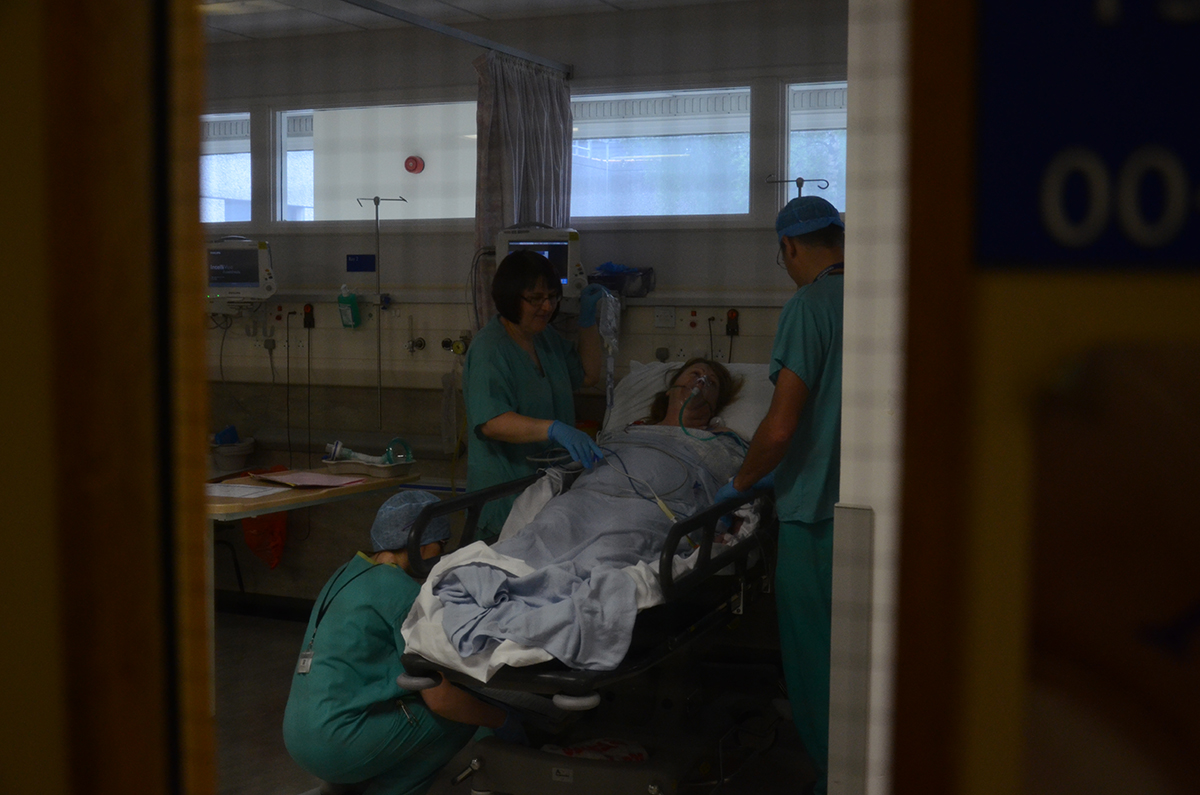 Did you feel like patients were in safe hands?

The teamwork at Ninewells is inspiring. There’s no place for egoism or career advancement in that room – everything happens for the safety of the patient.

Yes, I find that very moving. The vulnerability of the patient under anaesthesia – it’s a person at their most vulnerable, unconscious and surrounded by so many people.

To find that calm mood, and all these people working together – it’s very tender in a way. 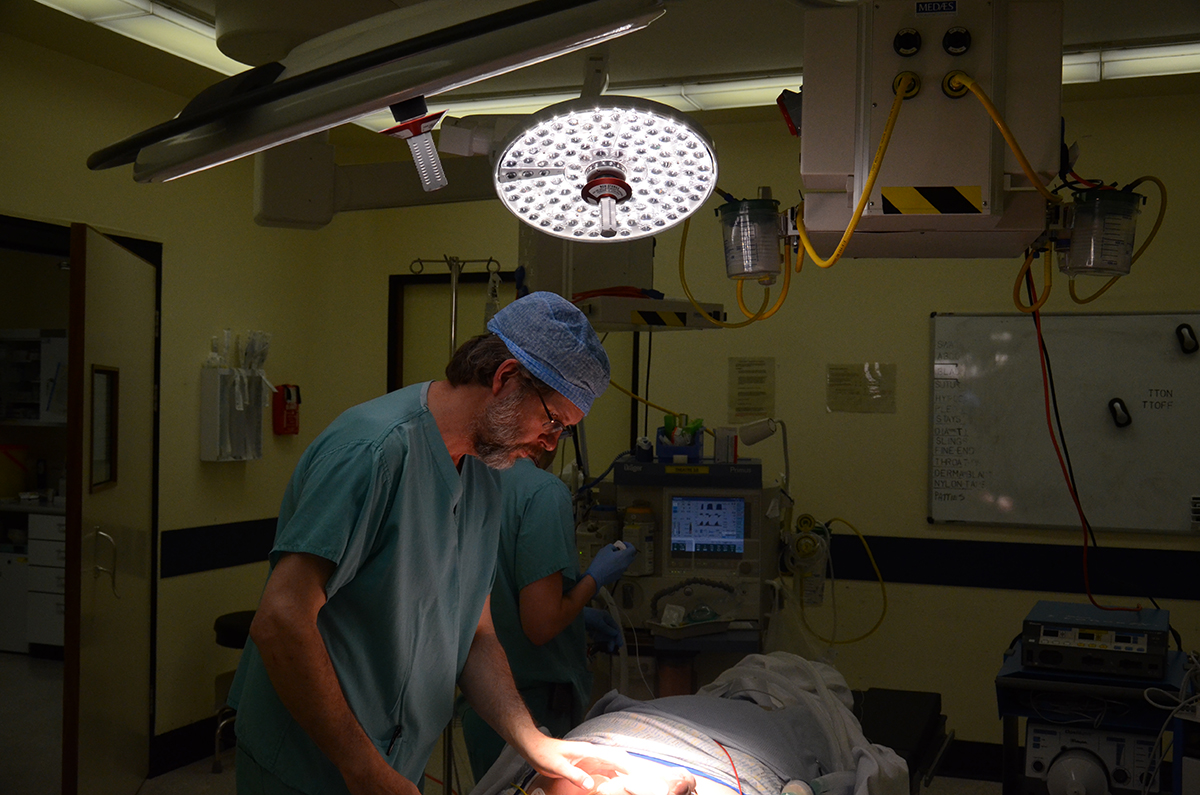 Has it changed the way you think about surgery around the world?

I was looking on the Lifebox website and I was shocked – I never thought that lack of oximetry was an issue in so many countries.

You show the Checklist twice, once in photos and once in paint – why is that?

After the second viewing we thought that the pictures might be too intense for someone about to undergo surgery. The drawings are a simplification, and even though they’re the same scenes, people seem to prefer them. There are lots of things you don’t want to know before the operation – other than that you are going to be safe. 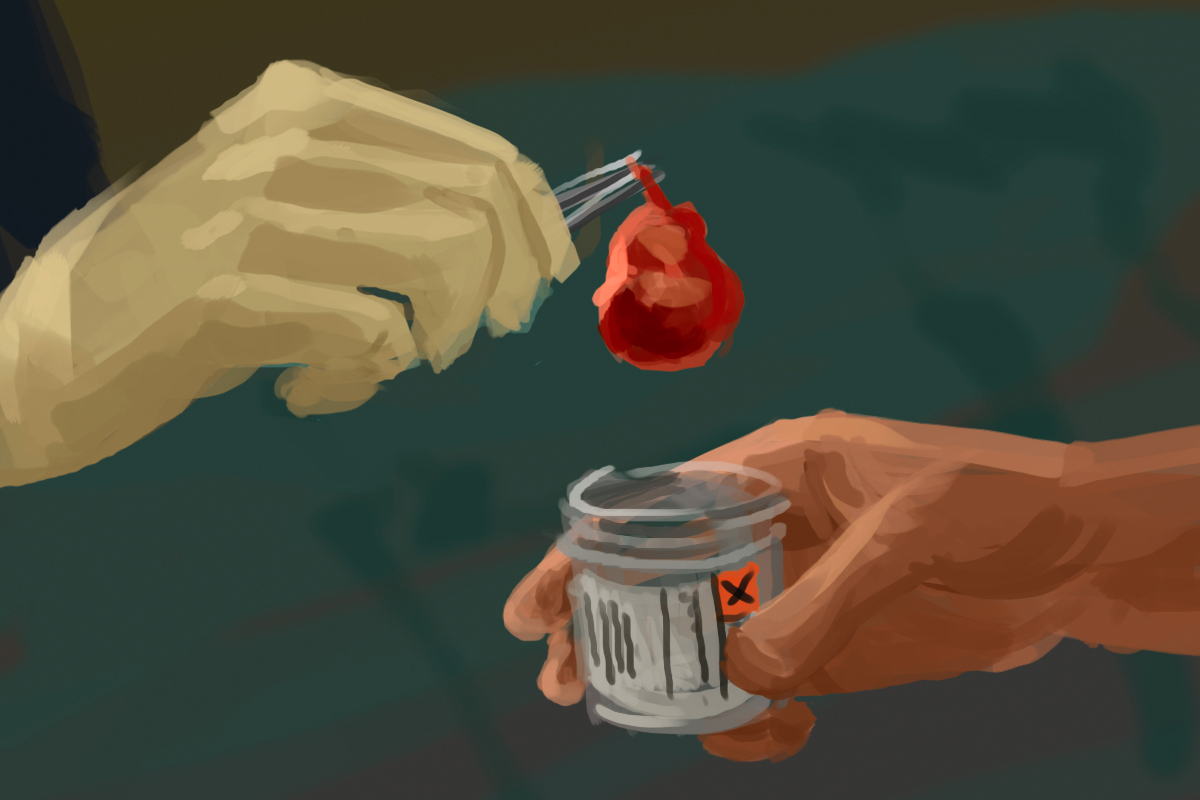 I used an impressionistic technique called speed painting where you set a timer, start painting and as soon as the timer goes off, you stop. It makes you keep only the most important aspects of the scene.

How did you relate to the Checklist it as a non-medic? 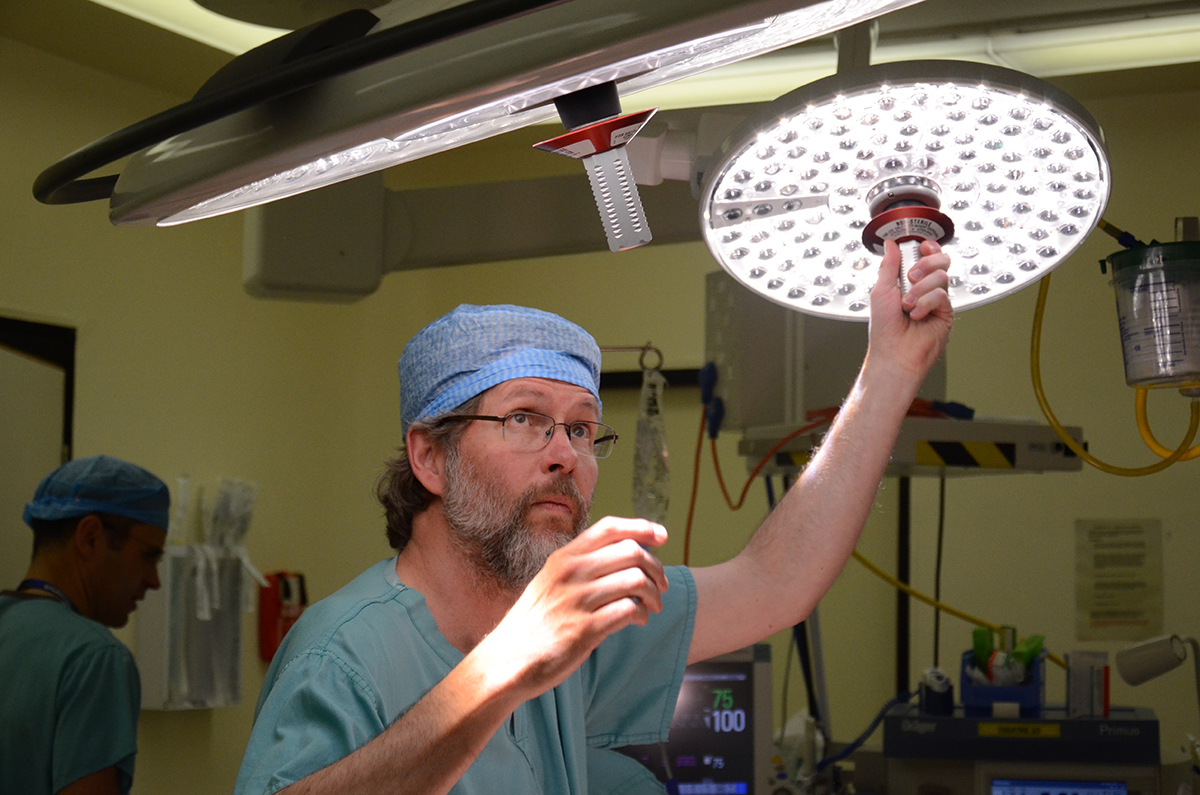 Checklists happen everywhere. It’s this methodology, a frame of mind behind a sequence of events that shows how teamwork is realised. I used to work as a production assistant at dance festivals – without a checklist we’d never be able to have a performance.

I found the surgical pause particularly poetic. A moment’s thought, everybody stops – it’s like this breath that a performer takes when they go on stage. The lights, the audience, the safety protocol – it’s no joke that the operating room is also called a theatre! 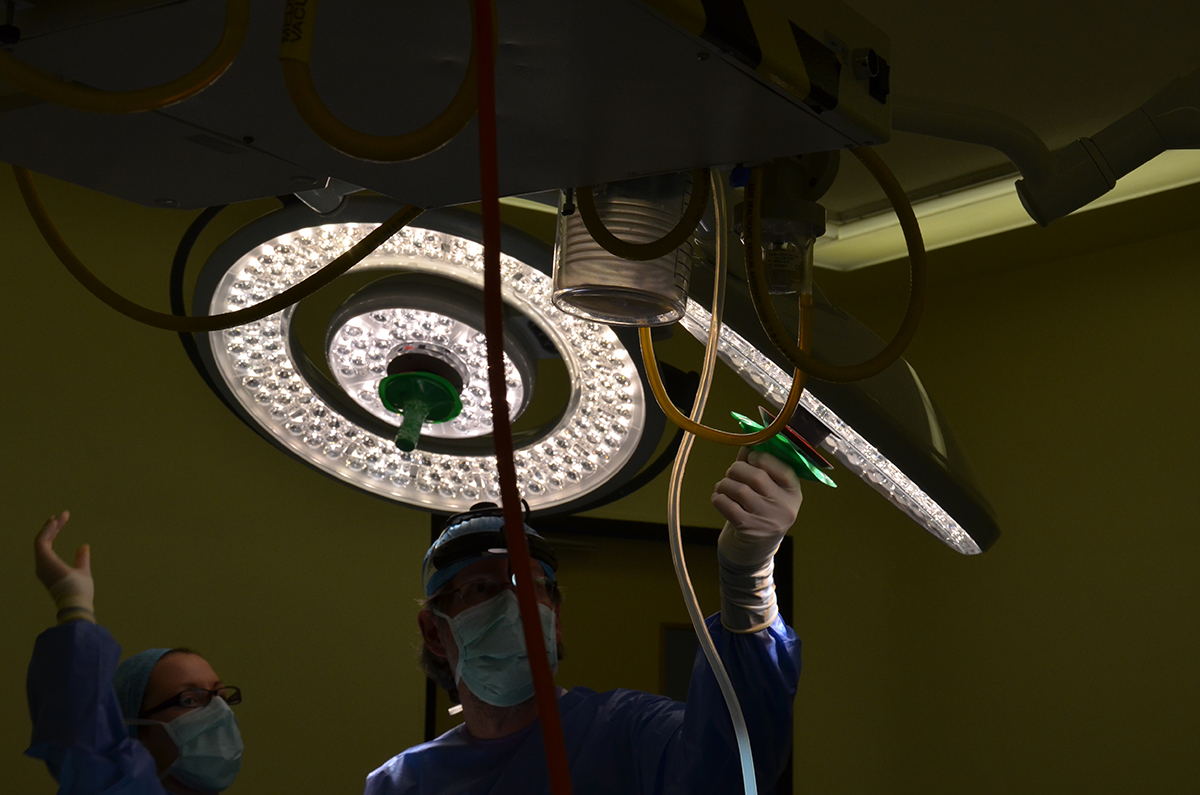