Caroline Kilduff is a recent graduate from Barts and The London School of Medicine & Dentistry.

Back from her elective in the West Indies, in the Federation of Saint Kitts and Nevis, we had a quick catch up to find out more about surgery by the sea…

What did you do for your elective?

I was working at the hospital on Saint Kitts, the bigger of the two islands. I spent three days a week in the ophthalmology clinic, one in their theatre, and one day a week in the main theatre (gynaecology and general surgery). 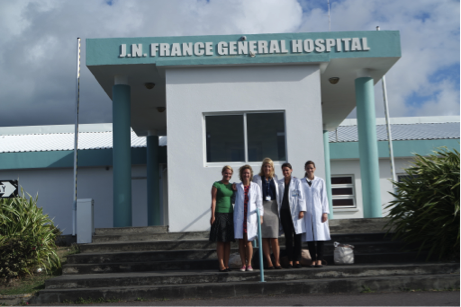 Was it different from what you expected? 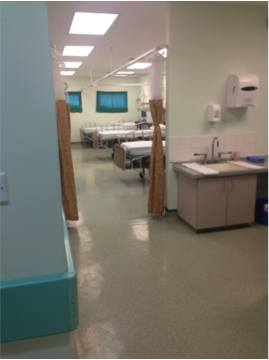 In many ways it was really advanced – some complicated elective procedures going on in the main theatre. But there were other things that were very different, like pain relief and lack of monitoring on the way to recovery. I’m not comfortable taking a patient to recovery by myself, even with all of the monitoring. But on the island there was a brilliant nurse anaesthetist and just one medical anaesthetist, often for two simultaneous procedures – the doctors had to stay behind, preparing for the next operation.

What’s the general public attitude towards surgery in Saint Kitts?

Lots of people are just desperate for their operation. In ophthalmology we saw a lot of pterygium – it’s a condition where skin grows over the corneas, brought on by windy, sandy environments – so we don’t see much of it in the UK. They’re nervous, but desperate to get their vision back. 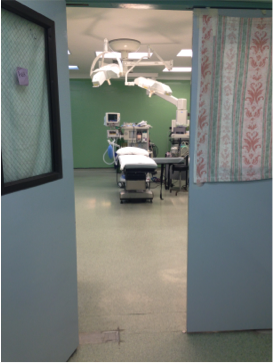 You’re working on a study about UK medical and nursing student training in the WHO Checklist. Did you find it in use in Saint Kitts?

The Checklist is about teamwork, and it was clear that the nurses and doctors know each other very well – there’s a hierarchy, but you can still see the scrub nurses working closely with the consultants. And they were meticulous about their swab counts, needle counts – they had a wooden structure with hooks on it, and every time they finished with a swab they hung it up to count. That was considered protected time for the nurses, everyone else respected the importance of that work.

But in terms of the full WHO Checklist – that wasn’t really on the radar. To bring it in and say, you need to change your practice, for instance you need everyone in the room before you start the operation – that would be very difficult. It would be a long-term thing.

Could you identify particular barriers to Checklist implementation?

In the UK we have a flow of registrars across hospitals – there’s a risk of discrepancy, but there’s also a flow of knowledge and best practice. On St Kitts, it’s very stable. Most of the doctors are consultants who train abroad and then return permanently to the island, and without the trainees you don’t have the flow of auditing, change of practice.

The anaesthetist was incredible – she’d do all these calculations for blood loss, fluids, these very precise and forgotten arts – but she left the UK before 2009, so something like the Checklist just wouldn’t have come into her training.

Did it change the way you thought about the Checklist?

It made me so aware of how difficult it is to change attitudes, particularly as an outsider. If there was a doctor who said: ‘For my list, we’re using the Checklist’ – my way or the highway style – it would be done. That’s the best approach, get the doctors on board, take ownership of the idea and then disseminate it.

What advice would you give to other elective students?

It’s challenging going in as a medical student. You’re used to one way of presenting to senior doctors in the UK, but hospital culture is very different around the world. The first step was learning how to fit in – how to say good morning to people at the start of a day! As soon as we did, we felt more welcome.