“If one of us can’t make it to the top, the other has to finish it.”

At the end of August, Dr Ed Fitzgerald and I fundraised for Lifebox through our climb up Mt Kilimanjaro. We had been waiting for this adventure for sometime, but I didn’t imagine we would have to wait another 5 hours for our permit to be approved before we began. I had enough time to try and teach myself how to knit (twice and ended up pulling it apart after that); and begin a chapter in my book before the necessary conversation of “What if,” came up to calm my restless nerves. I kind of brushed aside the conversation, my voice agreed with him. In my heart though, I thought I would never be strong enough to finish it if he couldn’t and the conversation was a mere distraction from using my wooden knitting needles to convince the park ranger to let us begin the climb before the dark and the cold set in.

Six days later, we were in the dark and the cold as we began our summit up Mt. Kilimanjaro at midnight. The full moon and twinkling sky was beautiful, our struggling icy breaths were not. After sleepless nights, cold conditions, and both of us feeling different effects of the altitude, with some birthday cake in-between, we were fully ready to get up that mountain but even more ready to get down it. While the moon was still high, we paused for a moment to check our blood saturation levels. 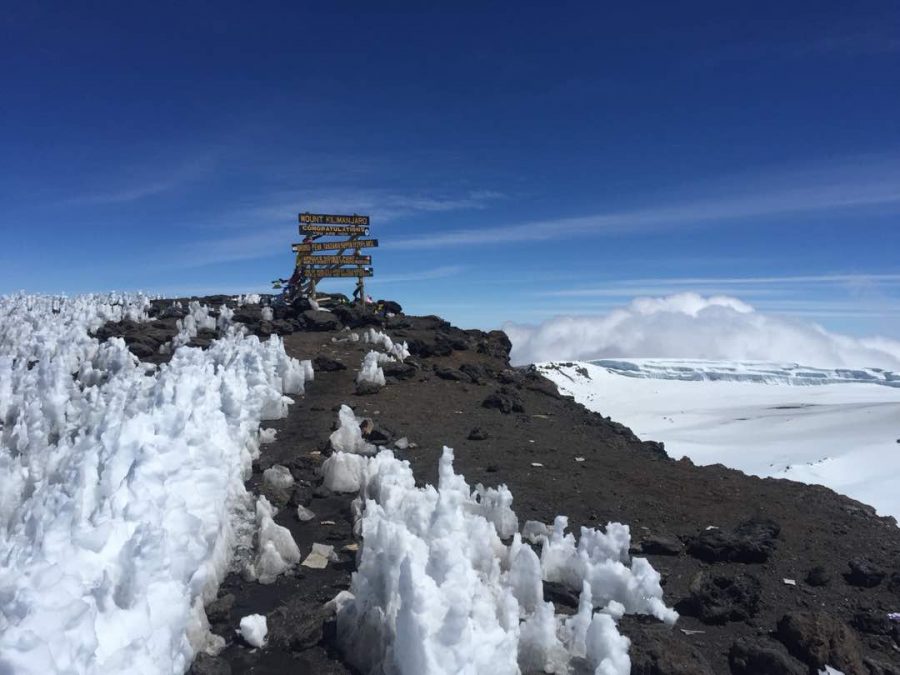 Mine was normal, Ed’s was a bit low.

We told ourselves he hadn’t slept well, he hadn’t eaten well, maybe he didn’t train enough before hand. All symptoms anyone would write off. Our guides Joshua and Ibrahim weren’t exactly convinced. So one kept an eye on me and the other an eye on Ed.

I convinced myself we were struggling because of the cold  – although that wasn’t hard because it was below freezing. But that it was the cold that was slowing us up. Once the sun would break through everything would be fine. As I started up the mountain, I kept thinking I was seeing tents high up by the crest with lights on. When I asked Ibrahim what the white blobs were, he very simply told me they were snow. There were other times I saw faces in rocks and apparently this is what happens when you’re not a demigod like our guides who do this on daily basis- you see things and think things that aren’t real.

It really is a life-saving pulse oximeter. 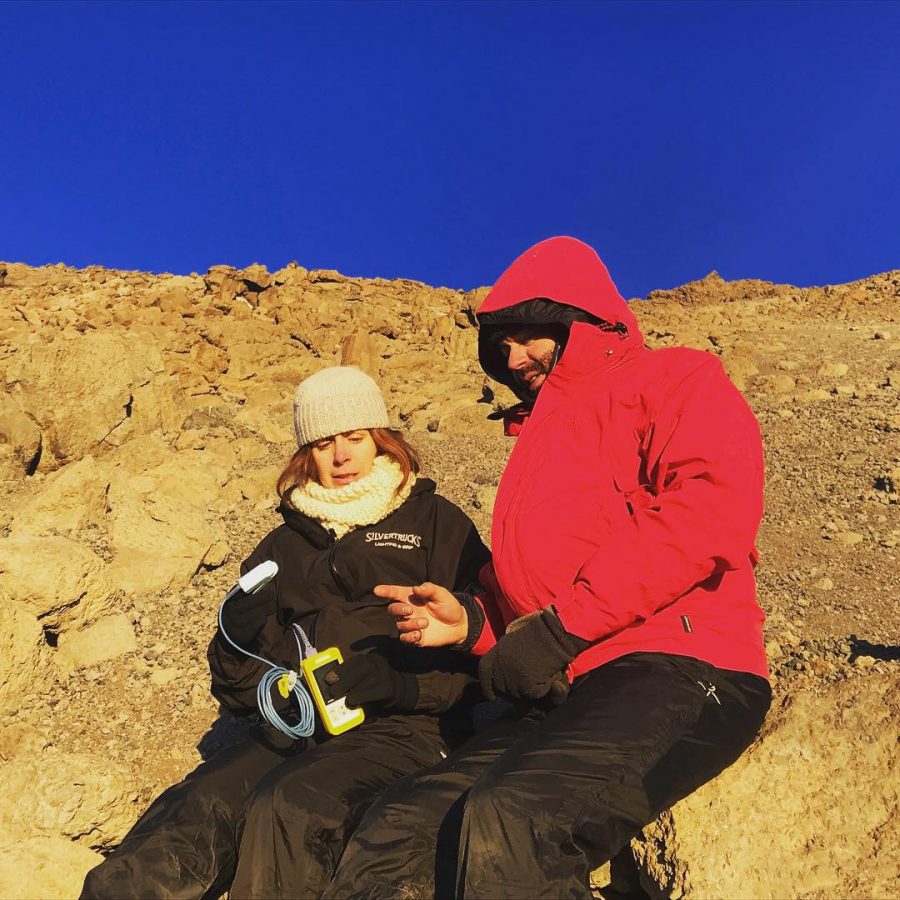 What was real was the fact that we were about 2 hours off pace, and Ed was struggling. Of course he should be, we told ourselves, it was the hardest day! Our guide, once again wasn’t convinced and took our blood saturation levels again. Mine was a bit lower, Ed’s was at a level that would be a call for a crash cart in any hospital. The tears in my eyes probably would have frozen if it wasn’t for the fact that the sun had just come out, I knew the only cure for any altitude complications was to go down.

Our guides acted so fast that Ed was already half way down the final ascent with a porter before they realized I was still standing in the same spot, 300 meters shy of the crest still wiping the tears from my eyes with my newly knitted scarf. They effortlessly climbed back up to
me as I recited the conversation between sniffles we had at the beginning of the trip.

“So you want to summit for both of you?”

Was it possible for Ed to get safely down to a lower altitude to where we were camping that night and I could still summit for us?

Just like a pilot and co-pilot in a plane who have the same qualifications, the same goes for guides on Kilimanjaro. At the end of the day, they are the ones in charge of their climbers safety which is why there should always be two. Ibrahim headed down with Ed as Joshua continued on with me to do the last part to reach the crest. I walked through the ice and snow, to make it to the very highest point on Africa – for Ed. By chance, I had the summit all to myself for a half an hour. And while I was sad Ed wasn’t there with me, I knew he was in good hands with the team we were with. I just wouldn’t know how good of hands until I got down to the base camp myself.

It took me about six hours to get down to basecamp, making my summit day 16 hours in total. Along the way down I was updated on Ed’s condition, apparently it had got worse even when he went down 1000 meters – he was short of breath going down hill. Against his instinct to crawl into our tent and go to bed, Ibrahim made him sit up and rest in a chair until his breathing settled, only it didn’t.

Without hesitation he told Ed he was going to have to go lower, much lower, as in off the mountain and into the hospital.

Two of the porters grabbed Ed under each of his arms and they raced down the mountain. By the time I arrived at basecamp he was admitted into Kilimanjaro Christian Medical Centre. I could rest knowing he was safe in the same hospital we had visited before we began this climb in support of Lifebox.

It all comes down to teamwork. 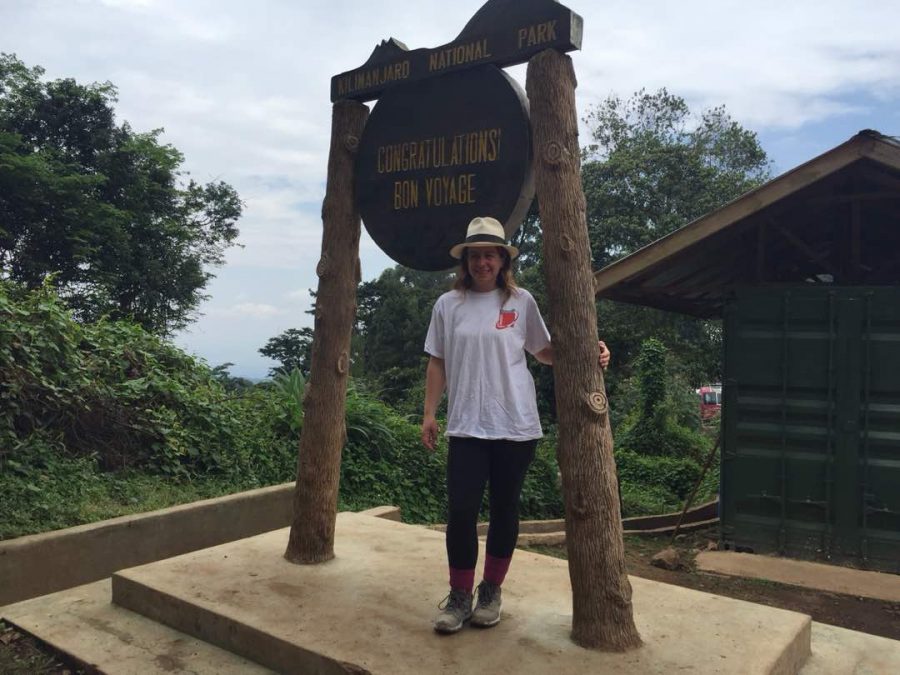 As a team, we took on this challenge both physically and financially to raise as many funds for Lifebox Foundation as we could. We had no idea that one of the recipients of Lifebox’s support, KCMC, would end up giving care to one of us. I look back on that experience now and the one thing that really stands out in my mind is how important it is for a team to work together.

A combination of teamwork let me sleep easy during my last night on Kilimanjaro: knowing we had a team of 12 porters and 2 guides who we could rely on to do the best possible job to get us up and down the mountain, Ed was going down to a hospital that thanks to the support of Lifebox’s work understands the importance of teamwork and patient safety, and we climbed that mountain and finished it as a team despite only one of us standing on top of it. Joshua our guide has done over 100 summits in his career, and he said ours was the only one where one person summited for two.

Ed learned he had high altitude pulmonary edema or HAPE.

It wasn’t the fact that he didn’t eat enough, didn’t get enough sleep or didn’t prepare properly for the climb, it was that he cannot be at that altitude, due to genetics. About 1% of the population has this, they just never know if they don’t go above 3000 meters unpressurized. If Ed and I were left on our own 300 meters below the crest, with our disorientation due to altitude we’d most likely have pushed on and the consequence of that ultimately could have left our team one person short. In medical situations, while checklists can be important life saving tools they can’t be used alone. Both Ed and I spent a couple years of our lives focused on the impact they can have in global surgery, but I also learned they are only as strong as the team using them.

We have a lot of teams to give thanks to: for Joshua, Ibrahim, and their team at for helping us accomplish our adventure and live to tell the tale; to the medical team at Kilimanjaro Christian Medical Centre, the team at Lifebox Foundation who support programs at hospitals like KCMC, and our team of supporters who helped us fundraise for them. We would not be here to write this without the teamwork of all of them.

If you’re looking for somewhere to give to today for #GivingTuesday, you can give to Lifebox via their donate page or through our extended fundraising page for Lifebox Foundation through the Christmas season. We’d love for you to join our team of supporters in making surgery safer around the world to donate here: https://mydonate.bt.com/fundraisers/kiliforlifebox.

If you’re considering climbing Mt. Kilimanjaro we couldn’t recommend a better team than Joshua’s at Kilimanjaro Expert Limited and make sure the chef David makes you some of his avocado ice cream!

Lauren Anders Brown and Dr Ed Fitzgerald met while working with Lifebox Foundation. Ed’s work with Lifebox focused on implementing the WHO Surgical Safety Checklist in hospitals across Sub-Saharan Africa. Lauren worked with Lifebox to create a feature length documentary showing how the WHO checklist makes surgery safer around the world, appropriately titled ‘The Checklist Effect.’ They continue to fundraise and advocate on behalf of Lifebox, follow them on twitter: @LABCollaborate, @DrEdFitzgerald, @SaferSurgery.