Why was it important at this time for Lifebox and Ariadne Labs to initiate Checking In On the Checklist? With the Checklist being over ten years old, what were you looking to achieve?

Alex Haynes: Reflecting on ten years of Checklist uptake around the world, we realized there was a lot to understand about the role that the Checklist has played in surgical care, and to better understand where the opportunities are for its growth. It seemed that the Checklist had taken off in a way beyond what we had expected when we designed it. To understand where future opportunities lie, we realized we needed to do a good assessment of the landscape.

LB: It’s been ten years since the landmark New England Journal of Medicine article on the Checklist—does Checking In On the Checklist show anything you were not anticipating ten years ago?

AH: We certainly didn’t expect it to have the rapid uptake in parts of the world that it has had—in high-income settings, it has become largely the standard. What the report tells us is that it also has had significant uptake in low- and middle-income parts of the world, but there exists lots of opportunity both for new reach and increasing effectiveness of its use in these places.

LB: Where does the Checklist go from here in order to maximize its potential, then? 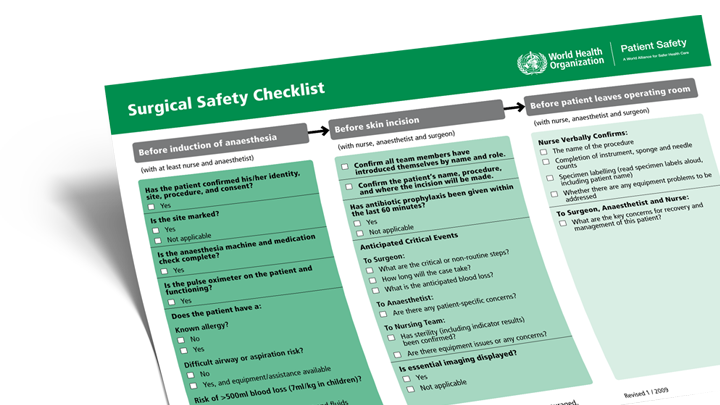 The WHO Surgical Safety Checklist. The report recommends tailed adaptation of the Checklist.

AH: That’s a good question. Part of it really comes from providing stronger tools around education and implementation to clinicians in diverse parts of the world. It’s really not just a high-income/low-income issue; there are high-income places where the Checklist isn’t used well, and vice versa. I think there are lots of opportunities to take experiences gained where the Checklist has been integrated well into practice to guide those who are interested in bringing the Checklist into their environment. At the end of the day, the Checklist only functions as well as the way it’s integrated with the work. People often lack the tools to turn their enthusiasm around the Checklist into real work and real clinical care.

LB: Do you see the Checklist as a good tool for increasing that enthusiasm?

LB: The report recommends tailored adaptation, securing buy-in, and building accountability: what can organizations like Lifebox and Ariadne Labs do to support that effective implementation?

AH: That’s a great question, and I don’t think there’s a simple answer to that! The areas where organizations like Lifebox can be most helpful are in providing guidance around adaptive implementation. There is a fine line between saying ‘adapt this for local use’ and ‘do whatever you want to do.’ There is guidance out there about how to implement the Checklist well, but it’s not always accessible. Part of what Lifebox can do is raise awareness of what successful Checklist use looks like by teaching implementation and adaptation, providing structure, and by fostering relations that support ongoing work with the Checklist. Implementation is not an event; it’s a process, one that can take quite a bit of time, and creating sustained engagement through the process can be challenging.

LB: Because implementing the Checklist is a process, we don’t want to see a one-and-done approach to Checklist programs; what issues arise due to its longer-term nature?

AH: That’s a critical consideration, because we hope to create sustained change. Creating a community around surgical safety and providing support, evidence, and a place for people to be renewed and inspired is one way that it can work. One barrier is that in low-resource settings, there are so many demands for peoples’ time and attention, which may make them resistant to introducing something new like the Checklist.

LB: You wear and have worn a lot of hats, as a surgeon and advocate for global surgical safety. Why do you support Lifebox now as our newest board member?

LB: Well put! Thank you for taking the time to answer these questions, Dr. Haynes—and congratulations on your appointment to Lifebox’s board!

Alex Haynes, M.D., M.P.H., was a part of the original team that worked with the WHO to develop the Surgical Safety Checklist, helping to lead the pilot study in eight countries which first established its effectiveness. In 2009, he authored the landmark New England Journal of Medicine article which showed that the Checklist reduced morbidity and mortality rates where it was introduced. He has been involved in efforts of Checklist implementation and adaptation in settings as varied as South Carolina, Scotland, Rwanda, and Moldova.

Dr. Haynes is also the inaugural associate chair of investigation and discovery and an associate professor in the Department of Surgery and Perioperative Care at Dell Medical School at The University of Texas at Austin. He is charged with developing the research strategy for the department.

Prior to joining Lifebox and Dell Med, Dr. Haynes was an associate professor of surgery at Harvard Medical School at Massachusetts General Hospital, and served as the director of the Safe Surgery Program at Ariadne Labs, a center for health care delivery innovation at the Harvard T.H. Chan School of Public Health and the Brigham and Women’s Hospital.

Dr. Haynes is a practicing surgical oncologist with a focus on melanoma and soft tissue sarcoma.